2 volumes. Large folio (ca. 57 x 38 cm). Contemporary gilt vellum with central ornament on front and back sides, red morocco title-labels, with ties. With 2 armorial title-pages with letterpress slips with the title and the publishers name pasted and 225 engraved plates showing 330 towns, military plans, views and illustrations (mostly double-page, including one folding and several inset in text and many showing two or more subjects).

A large-paper copy of the first Dutch edition; first published in Latin in 1649 after the Treaty of Westphalia. – This great town book of the Dutch flourishing cities by the Dutch cartographer Joan Blaeu (1596-1673) are among the most reliable guides for studying the Netherlands of the 17th century. It reflects the Dutch Republic’s struggle for independence from Spain. Volume I contains the Dutch Republic and volume II the Spanish Netherlands (Belgium) showing city plans, including fortifications and battle plans, and important buildings, illustrated with fine cartouches and coats of arms. The accompanying texts provide valuable information on the cities geography, history, important buildings and culture. Bound up, by sentiment, with the most dramatic and heroic period of the shaping of the Dutch state, it shows the proud and industrious cities in their full splendor. Of all the Blaeu atlases, the town atlases of the Netherlands are held in the highest esteem in the Netherlands (Van der Krogt IV-1, p. 299). – (Some lvs with faint marginal waterstaining, some small tears, a very few lvs with small wormholes in the margin). – A desirable copy of a magnificent picture of the Dutch Golden Age.
Van der Krogt IV, 43:121. 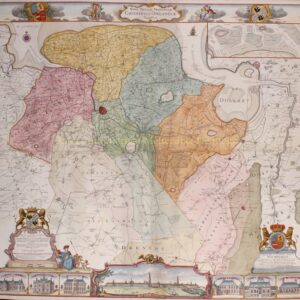 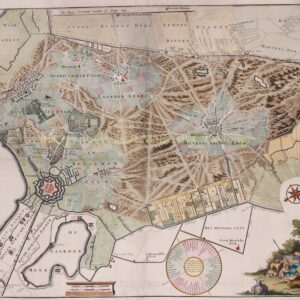